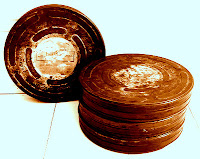 The recovery of long-neglected family items from poor storage conditions is nearly always a time of regret.  When you strain to pry open a rusty film can or feel the desiccated rubber band disintegrate as you attempt to remove it, it’s natural to wonder why you put the task off for so long.
Press on.  Things will never get better without intervention, so rescue what you can while there’s still time.
Snowden Becker, co-founder of the annual international Home Movie Day event and the nonprofit Center for Home Movies, notes that the storage of old home movies can be very problematic, sometimes creating problems that will need to be addressed before the film can be recovered.  Snowden walked me through a typical situation:
“Abandoned or neglected film may have been hastily tossed in a box or not properly prepared for long-term storage, so you may encounter reels of film that are over-full with loose ends unwinding and crumpling up, or boxes of film fresh from the processing lab with rubber bands securing the outer wrap of the reel.  Or at least, the rubber bands would be securing the reel if they weren’t crumbling into little bits that work their way down between the film pack and the reel, where they stubbornly lodge themselves until they have the opportunity to come loose and muck up a projector’s workings!
“Film cans may be rusting and difficult to open if they’re metal, or cracked and prone to scratching film (and hands!) with sharp fragments if they’re plastic.  Bent or broken reels may crush the film pack or abrade the surface of film when it's unwound.
“Leaders – lengths of blank film at the beginning and end of a reel – may be too short, damaged, or missing altogether, leaving the outer wraps of a reel of film unprotected and especially vulnerable to scratches, dirt, and moisture.”
In cases like these, remove the films to a stable environment where you can calmly examine the items to determine appropriate next steps.
© 2011 Lee Price
Posted by Lee Price at 6:00 AM