In the museum business, it’s not that unusual to hear stories of the discovery of unexploded ordnance in a collection.  It’s been sitting there in storage for decades (perhaps since the Civil War or World War I) and then suddenly – in the blink of an eye – it’s a crisis.  Police are called;  the building is evacuated. 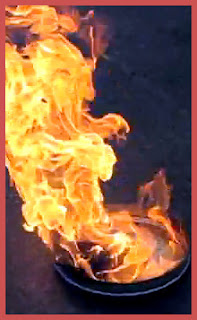 It’s understandable to have a similar panicked reaction when old film stock is discovered.  Perhaps you’ve heard the stories of horrifying theater fires in the 1920s.  Or recently watched the mountain of discarded nitrate film erupt into flames at the climax of Inglourious Basterds.   Nobody wants to find a ticking film bomb in their attic.
Is this a reasonable fear?  I posed this question to Snowden Becker, one of the co-founders of the annual international Home Movie Day event and the nonprofit Center for Home Movies.  Snowden is a doctoral candidate at the of , , where she is studying how home movies and amateur media become integrated into our larger cultural heritage.  She frequently consults on preservation issues for personal and institutional film collections.
Snowden’s answer was fairly reassuring – at least 99% of the time, there’s no reason to call the police or evacuate the building.
“If there's one thing an average person knows about old film, it’s that the cellulose nitrate stock used before 1950 was extremely flammable, unstable when deteriorating, and very dangerous to store in the home or under other uncontrolled conditions.  The fact that people are generally aware of this is a testament to the potency of the ‘nitrate won’t wait’ slogan of pioneering film preservationists who were desperately trying to save the disappearing treasures of early cinema.  The only downside of their successful messaging is that it may have made some people fearful of handling film they discover in their homes or institutional collections, because ‘it might blow up.’

“The good news is this:  Any 16mm film that you might encounter in your attic--as well as ALL of the other commonly encountered amateur film gauges such as 8mm, Super8, and 9.5mm--is what’s called SAFETY film.  Instead of cellulose nitrate, it’s cellulose acetate, a non-flammable alternative to the more dangerous nitrate film.  Chances are that any family films you find will be safety film.  HOWEVER…  if you do discover any 35mm film (it’ll be about two fingers wide, with matching perforations running down both edges), you should immediately contact your nearest film archive for advice and assistance.  They’re easy to find online.  A good place to start is this easy-to-access National Film Preservation Board directory.
“When rummaging through that box of films in your attic, basement, or closet, your only concerns should be inadvertently damaging the film material itself or possibly exposing yourself to some health risks related to the films’ storage conditions and state of preservation.  For instance, if you’re prone to asthma or allergies, be especially careful that you do these initial investigations in a well-ventilated area.  This can be dusty work and sneezing is an occupational hazard for the film archivist or anyone who handles home movies.”
© 2011 Lee Price
Posted by Lee Price at 6:00 AM