From Transcript to Blog 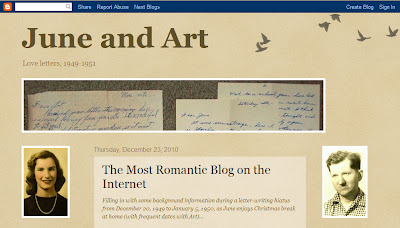 From a preservation standpoint, our family’s first priority is the letters themselves.  They preserve the genuine historic record.  One step removed from that is the transcription, described yesterday.  And then there’s the blog…
The June and Art blog is an interpretation.  With June and Art, I attempt to make the historical material in our family collection accessible and interesting for a general audience.  It is a couple of steps removed from being authentic preservation.
Each item – letter, transcripts, and blog – serves a different purpose.
The value of a transcript increases according to the degree the content is valued independent of the object.  Okay, that sounds a little confusing.  But here’s how it works:  The stories in the letters – and their ability to capture the voices of June and Art – are of much greater personal value to us than the letters as objects.  If we ever lose the letters, it would be unfortunate but not a tragedy as long as

we still have the transcripts.  (On the other hand, this wouldn’t be the case with an oil painting by a famous artist – or even an oil painting by Art Price.  A digitized image of the painting would never come close to the value we place on the actual object.)
The June and Art blog interprets the historic record.  When editing the letters, I make an effort to eliminate redundancies, to streamline the main story threads, and to clarify obscure references.  When a story line leads nowhere (i.e. minor references to water rationing in 1949), I don’t include it.  I can promise that the central love story remains intact, and I’ve even carefully kept all the passages that edge ever so slightly (if much imagination is applied) toward the suggestive.  The letters are edited but not bowdlerized.
Artwork and photographs are digitized for the blog then tweaked using Picasa software to make them work better on a computer screen.  They are 21st century interpretations of the originals.
I’m very pleased with how everything looks on the June and Art blog and delighted that my parents’ artwork is now more accessible than ever before.  But the originals must remain my primary concern as we work to preserve a family collection.