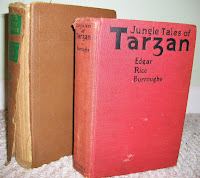 My Hamlet and Tarzan are the same.  Not the same character and not by the same author, but when looked at as physical objects, my family books of Tarzan of the Apes by Edgar Rice Burroughs and Best Loved Plays of Williams Shakespeare are essentially the same book.
I’d always assumed they were different.  The Burroughs book was a cheap pulp book, only a half-step up from the mass-market pulp magazines that originally published his work.  The Shakespeare book, however, was “the world’s greatest literature,” published by Spencer Press and in the introduction they promised:  “Mounteney in his careful designing has created books possessing rare beauty of design and exquisite good taste which view in appearance and handsomeness with the Spencer* masterpieces.”  All lies.  It’s a cheap book, no better than the Tarzan.

Jim Hinz, Director of Book Conservation at the for Art and Historic Artifacts, placed the two books next to each other, pointing out one similarity after another.  According to Jim, they were both consistent with industry standards for mass-produced volumes…  but no better.
Their covers consist of a thin layer of buckram, a stiff cloth treated with a starch mixture, over

boards.  The spine linings were insufficient on both books, not capable of standing up to normal usage.  And the paper was virtually identical in both books, characteristic of the American wood pulp papers that dominated the industry from 1850 to 1950.  This paper puts out acetic acid which breaks down the paper fibers, resulting in the most brittle paper in the world.
My poor Shakespeare—it turns out it’s not much more than a “quintessence of dust,” not a paragon at all.
* William Augustus Spencer was a famous book collector who specialized in fine French bindings.